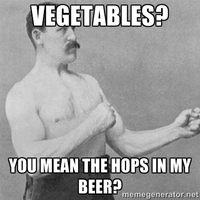 When people ask us "Why make hair care products out of beer?" here at Duffy's Brew we immediately point to the many health benefits that have been found in beer. For literally millennia, dating back to at least the Nubians of ancient Egypt, beer has been known to have substantial health properties... and those translate to superior hair-care products.

But, of course, knowledge of those healthy properties was largely accidental prior to the 20th century. The Nubians had no idea that beer -especially hops- were anti-microbial, since they had no idea what a "microbe" was. They just knew that beer made them healthier. It wasn't until the last hundred years that we started to look into WHY beer is so great for the hair and skin.

That's why we're always excited whenever new research appears demonstrating the health benefits of beer and hops in concrete terms. In fact, there've been two awesome new studies recently on the subject.

Science Says: Beer Is Even Better For You Than We Thought!

One of the studies looked specifically into Cascade Hops, used in a variety of beers such as Sierra Nevada Pale Ale, and attempted to identify more of the chemicals at work in the hops. What they discovered confirmed one of the longest-held beliefs about hops which had, previously, not been verified by science: Hops in fact do have substantial anti-inflammatory properties.

We're especially happy about this one, since it completely validates our beliefs that hops-based beer shampoo helps tighten the scalp and the follicles.

The other major study involved attempting to synthesize some of the major chemicals at work in hops, called humulones and lupulones. Isolating these chemicals directly from hops is extremely difficult work, and results in very small amounts of them, making direct research hard to conduct.

Being able to synthesize these chemicals would open up significant new resources for research and for creating medicines based on them.

The study's authors were extremely optimistic about the potential for their research. Studies over the years have linked them to a wide variety of benefits, including fighting dementia, preventing respiratory infections, or even -this is the big one- helping to fight off tumors.

That's right! While it's too early to say for certain, it's looking like beer could literally contribute to the fight against cancer.

Basically, at this point, there's very little scientific argument to be made against the health benefits of beer, and especially hops. These marvelous plants have plenty to offer humanity, and we keep finding more great applications for them every day.

You know, besides making for great beer.

And in the meantime, if you've been wondering about whether beer shampoo is a good idea for your hair, you can take comfort in knowing that science is firmly on the side of hops being healthful. With the full range of hops-based products from Duffy's Brew, you've got a lot of options in crafting hair that looks great, smells even better, and brings a load of health benefits as well.

I'll lift a pint to that!