Science Roundup: Probing The Relationships Between Brews And Bros 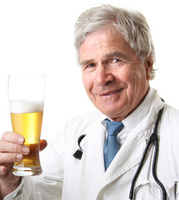 As lovers of great hair, great beer, and great science here at Duffy's Brew, this has been a bountiful week! Even though they could be researching boring stuff like cures for cancer, or global warming, or space exploration, some scientists just can't resist plumbing the depths of a frothy mug of beer, and we salute them for it.

There's a lot of great stuff that's been discussed lately, so let's dive right in and see what science has learned recently about everyone's favorite drink.

No, really. The fine folks at The Harris Poll recently conducted a lengthy study of craft beer drinkers versus their macrobrew counterparts, and discovered a lot of differences between them - and most of them quite positive for the craft fans.

So, if you're a craft beer lover, you're healthy and responsible. Woot!

Here's an oddball study out of Belgium which suggests your choice of drinking establishment really does change your perception of their wares. To be specific, different kinds of music changed how those studied rated beers they drank.

Most of the specific results were kind of unsurprising. Those listening to lighthearted Disney-style soundtracks found their beers to be sweeter, while those hearing music with deep rumbly bass thought the beers more bitter instead. Apparently, people's reactions to the music around them do transfer to their experience of the beer they're drinking!

So the next time you're looking for a venue, or planning a party at your own place, think about your music selections beyond what's trendy. You can make a lot of difference with some clever DJing.

Beer Goggles And You

Finally, The Atlantic offered an awesome collection of recent studies conducted on how being drunk changes people's behavior. It's not all for the good (obviously) but it's not all bad either, with some interesting results. Among the highlights: