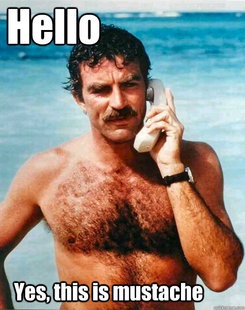 As decent-minded thinking folks, we here at Duffy's Brew like to keep tabs on scientific research as it affects our field. And while back, we took a look into research regarding beards and what society thinks they said about a person. That's all well and good for those who want the full chin curtain, but what about the more modest and discerning types who are content with a simple mustache?

Well, it should surprise absolutely no one on the Internet that even this relatively obscure topic has been studied by top men (Top. Men.) with deep insights into how society views a mustache and those who wear it. The good news is, people like mustaches! However, not everything is totally awesome.

But we'll get to that.

The Science That Shows Mustache-Wearers Are Awesome!

So, what did the American Mustache Institute discover about mustache perceptions? Here are the highlights.

1 - They're totally fine for work.

A truly impressive 92% of respondents to their survey reported that they believed mustaches were work-appropriate. And 65% went so far as to say they thought that mustache-wearing should be encouraged. So bully for them.

While the handful who said otherwise weren't asked for their reasons, we'd tend to guess they work in areas where facial hair is generally discouraged for reasons of extreme sanitation, like restaurant chefs or medical personnel.

2 - There's plenty of mustaches to go around.

Beards may be struggling to regain acceptance after nearly a century of being ignored, but mustaches never entirely went away - and they're here to stay! (hey, that rhymes)

Only 16% of people reported never working alongside mustachioed coworkers and -even better- all but 3% said it pains them to witness this lack of facial hair. And when over 50% report working among the 'staches on a daily basis, well, clearly "the more the merrier" is the attitude towards lip foliage.

While there is still some perception that mustached Americans are heavy drinkers, that apparently doesn't affect their performance (in any sense). People with mustaches are seen as fun-loving but still reliable and good workers, and are even seen as having firmer handshakes than the mustache-deficient. Really.

So if you want to seem gregarious and outgoing, a well-groomed mustache is definitely the right choice.

The biggest and most overwhelming preconception associated with mustaches was manliness! Huzzah! Over 80% of respondents said that a mustache makes the wearer look manly and even -this is their wording, not ours- suggests superior "cockmanship."

That one is probably a holdover from the 70s pornstache thing, but we are not complaining.

Unfortunately, this bright and shiny cloud does have a bit of a dark lining, because there's one area where mustache-wearers see discrimination: Higher-level promotions.

Mustaches are far more common among low-level workers than their superiors by about 2:1, and mustached CEOs are nearly unheard of. The higher up in the ranks someone gets in a company, the less likely they are to have facial hair of any sort. One could even say there's a 'stache ceiling.

No one is sure why, considering the widespread acceptance and desire for mustaches in the workplace. Either way, if you're seriously looking for promotion into upper-management, like a VP or CXO position, you might want to make the ultimate sacrifice and shave that mustache.

...Then grow it back, so you can start reversing this unfortunate trend!

And of course, when you groom with Duffy's Brew, you won't just be a totally awesome studmuffin. You'll smell great too.